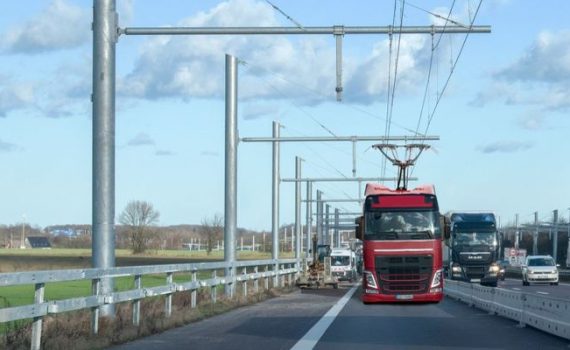 The “eHighway” is almost complete on the A 1 motorway near Lübeck. Functional tests took place last week, and this week saw the first test drive with a contact truck.

The research and development center of the University of Applied Sciences in Kiel has announced that electricity can now also flow through overhead lines once the work is completed. The center is a scientific partner of the eHighway field test (FESH) in Schleswig-Holstein.

Accordingly, the overhead lines of both directions are temporarily subjected to stresses during the functional tests. “We perform short-circuit tests, insulation and ground measurements and inspect individual systems, such as the defrost system.” All tests are supervised by site personnel, ”says project manager Jan Bachmann. Visual protective devices would be used to prevent road users from being distracted by occasional curves. The police, fire and rescue centers are informed about the functional tests.

However, according to the scientist, the work does not pose any danger to operation, but functional tests are necessary when putting these systems into operation. In recent weeks, more than 250 police and firefighters have been trained in operational training. “So we’re well prepared,” says Bachmann.

After the successful completion of all functional tests, the first test runs with overhead trucks on the construction site are planned from 3 June. The dismantling of the construction site is planned for June 17, so that all lanes will be available again at the beginning of the summer holidays. It is expected that in September, the forwarding company Bode (based in Reinfeld) will start its own transport via overhead lines. Until then, various test vehicles will be used on the test track.